Smart Alec and the story of the stolen jewels

This is the story of the not so complicated case that Smart Alec, a private detective, solved. The heroes of this story are: Mrs Owens, Cindy, Antonio, Marcel, Louise and, of course, Smart Alec. Mrs Owens phoned Smart Alec and told him while she was crying that her jewels were stolen. Smart Alex took a cab to Mrs. Owens’ house and now he is in Mrs. Owens’ living room.

S.A.: Mrs. Owens, may I ask you some questions?

S.A.: Good! Where were you when the jewels were stonel?

Mrs. O: I was talking on the phone in my room.

S.A.: Where did you keep the jewels?

Mrs. O: I kept them in a jewellery box, on the dressing table.

S.A.: Were there any other people in the house at the moment they were stolen?

S.A.: Which one is your sister?

S.A.: What were Cindy’s friends doing?

Mrs. O: Louise was taking a bath, Marcel was looking at a picture in the living room, Cindy was watching TV on the sofa and Antonio was eating in the kitchen.

S.A.: Do you know if there is a person who doesn’t like you?

Mrs. O: Well, dear Alec, Cindy was always jealous of me, but I couldn’t believe that my sister could steal my jewels. 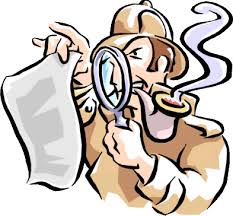 Cindy: Oh, yes! My sister had everything and I stole them because I want to be rich and marry Antonio! I’m going to be rich!

S.A.: Cindy Owens, you are under arrest! The case is solved!